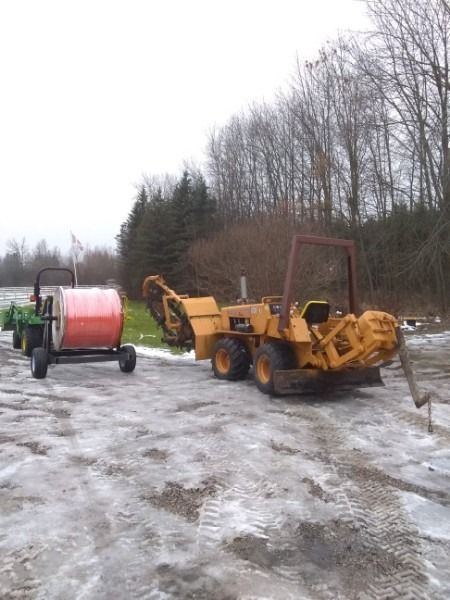 As part of our ongoing Future Fibre series we’re profiling community networks to learn about their challenges, solutions, context, and insights. In today’s issue we learn from Philip Mullis, who owns and operates wireless.farm in his community.

Philip is among a growing number of technologists who decide to take measures into their own hands and create their own Internet access, for themselves, and their neighbours. In learning from people like Philip, we hope to build a resource to make it easier for others to do the same where they live.

What provoked you to start your project?

Partly rage and partly wanting to do something better for the community to which I just moved. It started 3 years ago when I moved to Ariss, a part of the Guelph/Eramosa township, at the time the choice was between 3 wireless providers to which all services where over subscribed, intermittent and non reliable for many things like voip.

I honestly gave them all a try, and after building an 80 foot tower and going through the rounds of calling these wireless providers back out, I saw one climb 10 feet up my giant tower and state they couldn't get signal, this is of course because there are 60 foot trees, hence an 80 foot tower, at this point it was the last straw for me, having a highly technical background I said to myself I can do better for the people out here; to that end I spent the better part of 2 years of meeting with the Township to gain access to the water towers at the fringes of the township, this allowed me to start the rollout of wireless.farm in January of 2019, we pulling in gigabit connections at the tower and started distributing really fast high speed with unlimited plans to everyone that could get relatively good signal, using latest generation equipment and spare no expense mentality on proper equipment for the customers. (It's important to note, I wouldn't deliver service unless a radio checked out with enough signal strength).

It was a little hard to start, being an unknown, but after a few people hopped on the service and saw speeds of 200meg+ when they where previously received a spotty 5, the calls from referrals starting coming in quickly.

As I began ramping up on service installs, I also noticed a number of bizarre installs such as previous providers radios pointing right at walls of trees, and some even pointing away from there towers, gear that was wickedly ancient, and some new stuff that was from the bargain bin (ie a 49$ radio vs a proper 189-500$ radio).

When the summer was tapering off I started to develop into the second phase of the project which was the fiber roll out, this was the most ambitious undertaking I have done personally on my own.

I held a town hall meeting at the local library, now with most of the community aware of my efforts and reviewed the large fiber optic network which I’d be deploying.

I started to gather property consent forms to aid in some areas such that we could run fiber more quickly and efficiently (ie taking a 3km trip through the edge of a farmers field vs the county ditch of death/swamp) .

Why do you think rural broadband has been so bad and taken so long to happen?

Both, bell and rogers outsource there infrastructure to aecon, let's be real at a min of 38$/meter, the roi isn't there when the rural countryside in some areas you can go a km and hit only 2 homes.

I think the other wireless isp options that have been previously raking people hard for money have only survived as literally other options where not available.

What are you doing differently to make rural broadband a success?

We try to work with the property owners and farmers to run fiber across on a private agreement basis vs permitting basis greatly speeding up our deployment.

We are also running the entire network ourselves, we bought equipment to trench fiber, we even sourced fantastic pricing, we could turn a build that others would price at 1.2 mil into a build that costs 50k for material plus our own labour.

We also offer a reasonable and cheap senior package, something I don't see other providers doing.

How is your project being funded and what are your thoughts on the funding models for rural connectivity?

This is being entirely funded by my own life savings.

After seeing many of the funding projects and even meeting with one of the last remaining options, I feel they’re misspending tax payers money.

I have also been privy to some of the other providers plans, and they are not actually serving an entire area, they are b-lining straight for little pop up clusters of homes.

Ground based services have less chance of direct disruption, unless someone cuts your cable your humming away happily and can be upgraded in the future just by changing end components.

Wireless is great and all, but many challenges arise such as line of sight, and petty competitive wars where another competitor will aim equipment at your towers and try to cause disruptions.

What is your greatest challenge or obstacle to success?

Labour, as we are a small outfit. It's hard to juggle: personally speaking with everyone, getting permits sorted, and running/connecting customers all at the same time.

What response are you getting from community members and (future) clients?

We have received an overwhelming response, everyone wants in.

Are there technologies or communities that would make it easier for you to succeed?

If there was a tool library that lent our directional drills and heavy machinery that would have sure saved on the bank books.

Are there programs that you would like to see to compliment the arrival of reliable rural broadband?

I'd like to see some competent leadership, someone with a heavy technical background actually take up the role of giving out the grants, i.e. I’d love to see someone favor the small operators running their own networks vs giving to someone who just farms to 3rd parties with exorbitant cost contractors.

Philip’s story is interesting as it makes the case that informed community development can be far cheaper and more effective than the existing incumbents and previous initiatives. We’re told that rural connectivity is prohibitively expensive, yet entrepreneurs like Philip are finding a way to make it happen.

What Philip is doing outside of Guelph is similar to what others are doing around the world, including our own Ben LaHaise, who runs Community Fibre. In profiling their efforts we want to inspire others to do the same.

What do you think? What would you want in your community Internet provider?

“Future Fibre” is a recurring series in the Metaviews newsletter where we share some of the research, other models, news, and ideas around community based connectivity.

The series is sponsored by our friends at EasyDNS:

Mark also writes a smart newsletter called #AxisofEasy and is about to publish a fascinating book called “Unassailable” which will be featured in an upcoming newsletter (and would have independent of this sponsorship). I’m thrilled that Mark shares my belief in the potential for micro-ISPs and is sponsoring this series as a result.